After persecuting and censoring the traditional press, Nicaragua is now attacking Catholic radio stations and campaigning against the Church’s presence in the country.

Last month, Expulsion of images of nuns The Missionaries of Charity Association, founded by Mother Teresa of Calcutta, shocked the world when the nuns were escorted by the police to leave the country on foot.

Ignoring the repercussions of the case, Nicaraguan authorities this week shut down media outlets linked to the Catholic Church, occupied religious temples and seized broadcasting equipment.

Priest locks himself in church in Nicaragua

The Nicaraguan Center for Human Rights (Zenith) condemned the Nicaraguan police’s actions against the Church and Catholic radio stations on social media.

On Monday (1st), security forces raided the Church of Menino Jesus de Braga and the Church of the Divine Mercy located in the town of Cebago, Madagalpa, in the north of the country.

At the church, Sebago’s Catholic Radio is one of seven stations in the diocese. Matakalpa. Hours before the invasion, all of these radio stations were shut down by the Instituto Nicaraguans de Telecomunicas e Corrios (Delcor) on the grounds that the vehicles were not licensed to operate.

In a memo, Zenith refuted the authorities’ contentions, saying the necessary documents were provided by the diocese and Monsignor Rolando Alvarez, in charge of vehicles, in 2016.

🔴In the social networks of the Diocese of Matagalpa, information is spreading about Radio Station 5, managed by Monsignor Rolando Alvarez, which we consider to be another act of provocation by the Ortega Murillo dynasty against the Catholic Church. pic.twitter.com/6B9ujp8fXj

With cancellation of licenses by Police went to the Church of the Infant Jesus in Prague to seize equipment used by Delcor, the media.

But according to information from the confidential portal, the faithful of the church reached the spot early and removed the material from the radio.

Despite this, the police barged into the church and dispersed the crowd by firing tear gas shells. There have been reports of arrests and injuries in the crackdown, although officials have not confirmed the figures reported by religious and human rights groups.

Friends, faithful Vengan, I am afflicted; Police forced entry to transport equipment for Cantados de Na Capila. The police are attacking the believers inside the school. pic.twitter.com/RdDZ5IdizL

Until Wednesday (3), Father Uriel Vallejos locked himself in a room inside the church to prevent the destruction of Catholic radio, he said on Twitter.

According to the information he posted on social media, the police followed the scene and cut the lamp to evict the priest.

We are in the dark, and I cut the house-curling lamp. pic.twitter.com/OZQF1upmcJ

Throughout the week, Father Uriel reported the state of the siege in front of the police in the church. Once, the police tried to force their way into the room where he was staying, but failed.

“There are many police officers inside and outside the church,” he tweeted. On the same grounds as the church, there is also a school run by religious people, whose classes have been suspended due to police action.

Zenith condemned the police action and “called on the authorities to stop using tear gas against the Catholic population because the duty is to protect Nicaraguans, not attack them.”

See also  'We may be living our last days, our last hours', appeals in video Ukraine war | Ukraine and Russia

The United Nations High Commissioner for Human Rights said it was aware of the closure of Catholic radio stations, calling on the government to “immediately end” the repression of Nicaraguan citizens following a “brutal police operation.”

In an interview with Confidential, Monsignor Rolando Alvarez said he is ready to fight against censorship of radio stations in the diocese.

“All our radios were shut down. But God’s word is not silent.

“All our radios are closed to us. Pero la palabra de Dios, no la collaron”. Mgr. Roland Jose.

In 2018, repression of religion intensified

Six months after Daniel Ortega’s re-election, the situation of press freedom in Nicaragua shows no signs of improvement, and the case of Catholic radio stations is one of many recent examples in the country.

According to RSF, the local press “continues to face a nightmare of censorship, intimidation and threats”, with journalists subject to harassment, arbitrary detention, arrests and death threats, which is why many are exiled.


The persecution of the Catholic Church intensified in 2018, as the website Confidential highlighted the institution’s condemnation of human rights abuses against the people of Nicaragua.

This year, however, the regime stepped up its crackdown on the sectarians. In July, 18 nuns from the Missionaries of Charity Association were deported and forced to cross the border into Costa Rica on foot.

The group has been operating in the country since 1988 and maintains a home for destitute women, a home for the elderly and a day care center for young children.

In the same week, the government ordered the closure of 100 non-profit organizations. Ortega has closed more than 900 NGOs in the country since protests in 2018 called for his resignation. 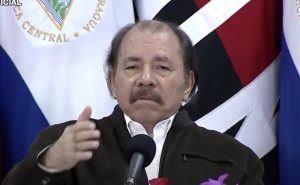